For years SpiralTrac™ technology has been blazing trails for customers who use single, double or split mechanical seals, allowing them to gain outstanding features and important benefits not available previously.

Customers are afforded a unique sealing solution for any application, while also being provided the opportunity to dramatically reduce direct and indirect costs associated with the operation of process pumps and equipment. Some fo these benefits are:

By preventing accumulation of solids in the cavity, circulating fluid around the seal, exchanging internal cleaned flush and venting the cavity when the pump is stationary, SpiralTrac is able to increase mechanical seal MTBF by (typically) two to six times the previous level.

The SpiralTrac patented design permits users to greatly reduce or eliminate flush in many standard process applications.  Although complete elimination of flush is dependent on the type of application, EnviroSeal’s technical support staff can assist you in determining your application’s suitability for total flush elimination.

In most mill and mining services, the flush itself contains solids from pipe scale, silt or settling ponds.  This dirt is injected with the flush and, due to flow patterns within the seal cavity, causes premature wear of the seal and cavity itself.  SpiralTrac develops a flow pattern whereby solids are drawn towards the front of the box, and subsequently channeled through the exit groove of the device and expelled at the impeller.

One of the problems caused by particulate circulating in the seal cavity is excessive shaft or sleeve wear. As noted above, SpiralTrac draws this particualte through it's grooving system, and expels it at the impeller, significantly reducing erosion of the shaft or sleeve.

Permits the use of soft faces in many non-crystallizing applications

Enables seals to operate in applications not possible before

Many customers have had poor results using mechanical seals because of high solids/fiber content in the process.  These solids get in around the seal area, de-water and consequently cause the seal to overheat and/or fail.  The SpiralTrac inherent ability to remove solids/fibers from around the seal allows many of these applications to be revisited. The end result?  A typical seal MTBF increase of approximately 2 to 6 times that of a conventional seal operating alone. 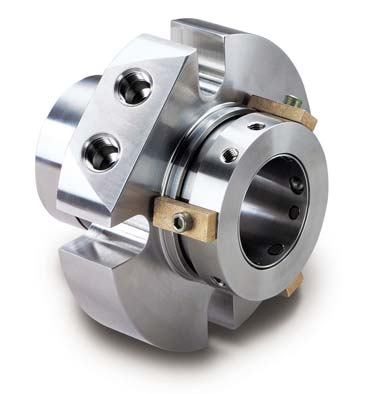 Solids will enter into the seal cavity whether or not a single or double seal is installed. SpiralTrac will develop a flow to remove these solids regardless of the seal design, resulting in a significant reduction or elimination of flush and increased seal MTBF.